It’s such a bliss to share the same passion in arts and craft with your own daughter! Today, we made her 1st volcano project for her Geography class. It was fun to do because it’s also my first volcano project. I never did any project of this sort when I was in elementary so I was pretty excited!

We did a Papier–mâché of the volcano using old newspaper and scratch papers (environmentalist in nature kicks in). It did not take us long to do it but I had to drive around for half an hour looking for a liquid glue. Here are the ingredients of our Papier–mâché volcano:
1. Old and used papers like news papers, torn like strips.
2. Luke warm water
3. Flour or corn starch
4. Card board (to hold your volcano)
5. Used plastic mineral water-glass, the top must be cut out
6. A baking tray
7. Some paint brushes
8. Water color or poster paints
9. A blow dryer
10. Masking tape
11. Big bottle of glue
And, here’s how we did it…
1. We placed 1/4 cup of flour or corn starch in to the tepid water and stirred constantly. I’ll tell you why we need this later. We then set aside the mixture as soon as the lumps were dissolved.
2. We cut the plastic bottle and taped it on the card board.3. My daughter rolled up some newspapers (but not to tight). The objective is to create an illusion of “texture” on the volcano. rolling it tightly will make the volcano flat.
4. Then, we stuck the rolled-up papers onto the plastic bottle using the masking tape. Don’t use other tapes as the strips of papers that you will later glue on the bottle won’t adhere well.
4. I asked my daughter to cut the newspapers into strips. No need to use scissors. Just rip it.
5. On the baking tray, I poured half of the glue and mixed with 4-5 tablespoons of water. I also added few scoops of the cornstarch mix on the glue mix. Mix, mix, mix! Now, the reason why we are adding cornstarch mix is to reinforce the adhesiveness of the glue and make the papier–mache hard when it dries up. This makes the volcano sturdy.
6. Next step was to put the strips of the newspaper on the glue mix.
7. When the papers were well covered with glue, we started gluing them on the volcano model until every nook and cranny was covered. We also covered the base which was the cardboard. 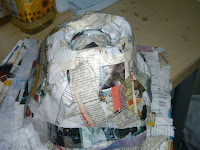 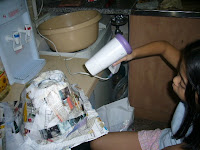 8. We blow-dried the volcano and when it was done, my daughter started to paint it. That was it! 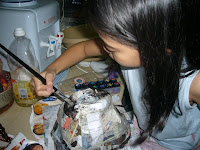 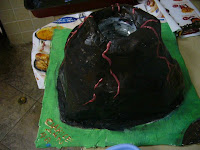 We now have a volcano Papier–mâché. Would you like to see an erupting Papier–mâché volcano? Here’s the trick:
Put baking soda in the cut bottle (which was placed in the middle of the volcano) at least 1/4 of it. Then apply few drops of red food coloring on a half cup of vinegar. Now, stand back while you pour the vinegar on the plastic bottle because this will cause a “fizzy eruption.” Now, there you have it. An erupting papier–mache volcano!
I bet my daughter’s going to have a good grade again on this one…;)