Many cosmopolitan cities in the world have train system that takes everyone from one point of the city to the other in a jiffy without the hassle of driving a car, getting stuck at traffic and contributing to the unnecessary pollution of driving.

Less traffic congestion
One less car on the street and multiply that to a hundred more will be a significant reduction on traffic congestion. Thoroughfares will be less congested as more people with bike will be encouraged to use the trains if they see bike stands or bike parks installed near the train stations.

Less pollution
With lesser vehicular smoke emissions, there will be less pollution in the environment. Hence, it is essential for any metropolitan and even suburban areas to consider having bike stands near train stations and even establishments and schools to keep the city clean and green.

Not space-consuming
A bike park with bike stands will not take up so much as space as much as a car parking lot or building. A normal 6-bike stand can occupy around 34 inches of plot only.

Improves health and wellness by encouraging exercise using bikes
Using a bike can burn more calories than driving. It helps rev up your metabolism while improving your cardio and overall well being.

Easy to maintain
A bike park with bike stands is easier to maintain than a spacious car park because of the little space it takes to be cleaned, monitored and maintained.

Cheaper installation costs
A simple bike stand that can hold 6 bikes (3 for each side) costs approximately between $70-$100 only than building a car park with roofs. A bike park will also need overhead covers and cemented flooring but materials for these are lesser compared to the number of materials to be used for car parks.

I have been around many cosmopolitan cities in the world and I have noticed how plenty of commuters are using the bike stands and bike parks near the train stations to park their bikes and proceed using the trains. My recent trip to Tokyo, Japan also highlighted how well accepted by the populace the bike stands near the train stations. They even have exclusive bike path around the city for bikers. I saw plenty of men and women in their business suits, traveling by bike, parking their bikes at the bike park just adjacent to the subway station. As a matter of fact, I have watched from Danny Choo’s website about underground electronic bike racks around Japan. I wanted to see one. Unfortunately, I did not go to Shinagawa Station to see the nearby Eco Cycle. I saw the usual bike racks near Maihama Station in Urayasu area which is really packed. 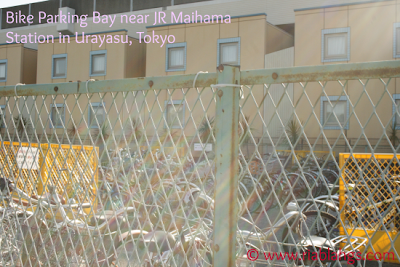 It is important for a city to encompass this kind of parking space for bike commuters. Not only does it help in keeping our carbon footprint to a minimum, it also helps in saving gas, improves health and well-being and decongests road traffic.